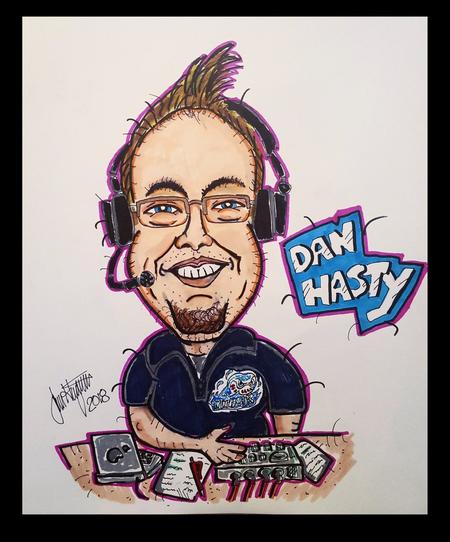 Dan Hasty is a play-by-play broadcaster based in Grand Rapids. His broadcasting infatuation began as a child, growing up admiring legendary Detroit Tigers radio voice, Ernie Harwell. It was through Ernie that Dan fell in love with baseball and calling sports on-the-air.

With interests in sports and public speaking, Hasty pursued a career in broadcast journalism in college. At the Central Michigan University, Dan graduated with honors from the School of Broadcast Journalism, taking home an award for "Best in Sports," given from 91.5 WMHW-FM -- the campus radio station.

While still attending Central Michigan, Dan joined the Great Lakes Loons, an affiliate of the Los Angeles Dodgers as the #2 radio broadcaster where he spent two seasons. While there, Hasty helped launch ESPN 100.9-FM WLUN in Midland, Michigan -- an all-sports radio station after the team purchased the station.

In 2009, Dan took his journey out-of-state in moving to North Carolina for various broadcasting opportunities, including serving as the Network Studio Host for the Wake Forest Demon Deacons and Houston Cougars for IMG College.

In 2011, Hasty returned to Michigan to serve as the radio voice for the Traverse City Beach Bums of the Frontier League before joining 97.1 WXYT-FM in Detroit, Michigan. While with "The Ticket," Dan assisted in a variety of roles for the station, including as a Network Studio Host for the Detroit Lions from 2013-2015, as well as a Sports Anchor, Reporter, Producer, and Talk Show Host.

With everything on his résumé except the opportunity to hone his play-by-play reps, Hasty accepted the lead broadcast position for the West Michigan Whitecaps, a Detroit Tigers affiliate of the Midwest League in suburban Grand Rapids, Michigan. The Whitecaps won the Midwest League championship in 2015, Hasty took home an award from the Michigan Association of Broadcasters for Play-by-Play excellence, and Dan was named the Midwest League’s Broadcaster of the Year by his peers in 2017. In the offseason, Dan announced college basketball for Saginaw Valley State University in 2017-2018.

Hasty's latest endeavor had him returning to his Metro Detroit roots after having accepted the lead broadcast position for the University of Detroit Men's Basketball team, a Division 1 Program in the Horizon League in Detroit, Michigan.

Dan is married to Angelina, the love of his life. The two live in Grand Rapids with their two dogs -- a female Golden Retriever named "Tessie," -- whom they rescued from an animal shelter.

Hasty is excited to see the next turn his life will take but makes it a point to enjoy the journey as opposed to worrying about the destination.

​Thank you for visiting!